Police in New Jersey have officially crossed the [thin blue] line and literally attempted to confiscate guns from an army veteran without a warrant. But it didn’t go as planned, because Leonard Cottrell Jr. refused to comply with the orders of the cops.

Eventually, all gun confiscation will be carried out by the police; who of “don’t make the laws, they just enforce them,” and Cottrell found this out the hard way. After serving two tours in Operation Iraqi Freedom overseas, Cottrell found himself at end of the state’s tyrannical oppression and gun elimination scheme.

According to The Daily Wire, two police officers were given orders to go to Cottrell’s home to confiscate his guns. The order followers complied, and “because [Cottrell’s] 13-year-old son had made a comment at school about the Millstone Middle School’s security, and the officers wanted to confiscate Cottrell’s firearms as part of an investigation,” NJ.com reported. But Cottrell disobeyed and defied the orders of the police.

Cottrell legally owns a shotgun and a handgun (not quite a cache of weapons by any stretch of the imagination) but based solely on comments made by his 13-year-old son, police demanded all his guns. According to the report by The Daily Wire, Cottrell says that his wife let the officers into their home and let them search their sons’ room where they did not find any weapons. But the search didn’t end there. The officers then made attempts to try to take his firearms, which “he has all the correct permits to own.” 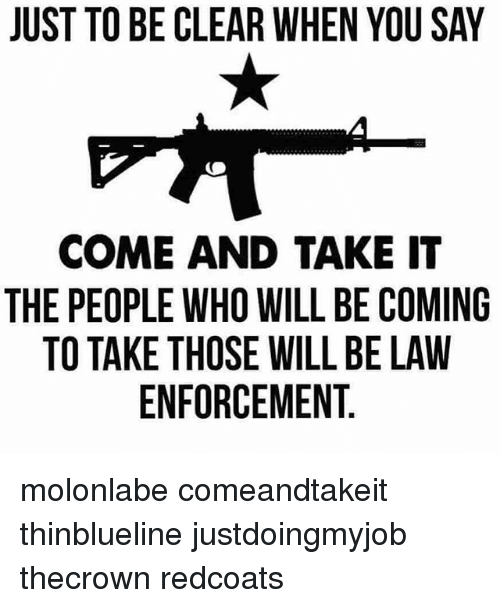 Cottrell said that his son is also very upset by the situation. The teenager did not do anything wrong and the entire situation is being misconstrued and blown up. “He didn’t do anything wrong, and he doesn’t understand why it happened — he was just having a conversation with nothing as far as threats,” Cottrell said. “It shouldn’t have blown up the way it did. But he understands it happened, there are consequences and there’s fallout from his actions.”