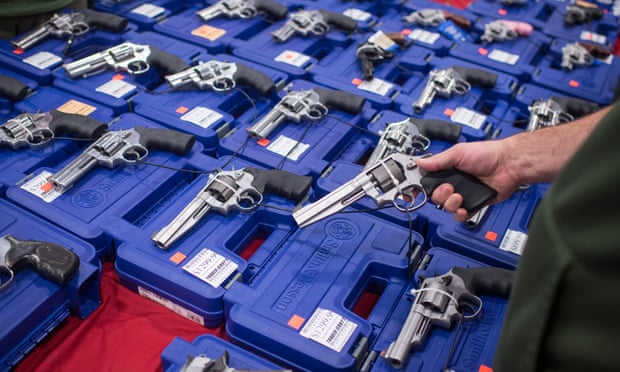 The show opened its doors just two weeks after the shootings at Umpqua community college, three hours’ drive to the south. Tyler Drake – a tall, relentlessly friendly man in his 20s – was manning the booth for J&B Firearms Sales. He explained that after such shootings “we actually get super-busy”.

The proximity of the shootings to Portland has only enhanced this effect. Distant massacres produce an uptick, too, but “this time we had a shooting in this state, so it went nuts”.

One of J & B’s specialties is tactical weapons. They make semi-automatic rifles conforming to the AR-15 platform in-house, sourcing their parts from local manufacturers. Not all of these are for what the industry describes as “home defence”. Drake explains that “people are hunting deer with these now. They’re versatile.”

Still, since the shootings, he’s seen people coming in to buy several weapons to outfit themselves and family members, or to provide for different scenarios.

“People think: ‘I need to protect myself and my home,’” he says.

And thus our conversation arrived quickly at the crucial sticking point in the debate about gun control. Whereas some see an AR-15 as a source of mortal peril, others see such weapons as a guarantee of safety, as well as a source of pleasure. And it’s only at a show like this that one can get a sense of how this translates into a broader, all-American “gun culture”.

The show filled a cavernous room at the Portland expo center. Thousands upon thousands of handguns, shotguns, rifles and assault weapons were arrayed for inspection and sale on tables rented by exhibitors, some of whom were gun stores or manufacturers, and some of whom were part-timers only selling at shows and online.

But it wasn’t just weapons on offer. There are whole parallel industries offering accessories, literature and pro-gun ephemera.

She got the idea after noticing that in warmer months, women’s clothing does not allow guns to be effectively hidden. “For women, the problem is that holsters are a great way to carry, but a lot of women couldn’t hide a holster,” she explains.

Brincat, a mother who lives in rural Oregon, designed a bag for herself a couple of years ago, then found that there was a market for her designs. She now runs a thriving business from her home and sells the bags online to women all over the country. They can choose from existing designs, or create their own combination of colours and styles. “I can do a custom order at no additional charge and make it specific to whatever firearm.”

Then there’s Exotic Firearms, founded and run by buff and chatty ex-marine Ryan Fisher. He sells the Nemesis 37mm projectile launcher, which can be affixed to a simple stock or to the rack on a range of rifle platforms.

“It’s a flare launcher,” he explains. “It’s legally defined by the ATF as a signalling device.” Using it with anti-personnel projectiles would require modification and the sourcing of ammunition, which is not exactly easy to come by.

Fisher sells the launchers with bundles of flares and fireworks, and insists that the main purpose is amusement. Still, when it’s affixed to a gun it looks like the kind of thing that has launched a million grenades in a thousand action films and first-person shooters, which is presumably a major source of its appeal.

Of course, one can’t have a gun without ammo, the manufacture of which is the principal concern of Nate Niece’s Red Skull Ammo, another one-person local operation. He makes ammo at home under federal license, and also sources it for resale from other small manufacturers.

Now and again in recent years, he has struggled to keep up with the demand for certain kinds of ammunition. These surges he puts down to shifts in the political wind. “If a particular candidate threatens bans or changes in the laws, a lot of people want to buy up in case it passes.”

There were big shortages around the election of Barack Obama. In the coming political year, “if Hillary Clinton is the frontrunner, it will go insane, business will go through the roof”, he says.

And herein lies one of the other paradoxes of gun control: even raising it as a prospect represents a sales opportunity, a stimulus to demand for a sprawling industry that includes both multinationals and mom-and-pop operations.

Gun control activists like Penny Okamoto from Ceasefire Oregon are acutely aware of the way the industry turns aspects of the debate to its advantage. Over the phone she speaks with calm purpose, and a surprising level of optimism, about a problem that many consider intractable.

In her mind, it’s important to recognise that “we have a saturated market. We own half of all the civilian guns in the world.” The industry, via the NRA, has repeatedly intervened to create debates in order to expand the market. “This is why we have concealed carry laws: so gun manufacturers could make smaller guns and sell more guns. This is why we repealed the assault weapons ban: so gun manufacturers could sell more guns. The second amendment has been turned into a marketing tool.”

Unlike in much of the rest of the country, Oregon demands full background checks at gun shows; all vendors at the Collectors West show had to ensure that their customers were neither felons nor suffered from a mental illness.

Implementing this nationally is a key part of the proposals brought forward by Democrats including Oregon senator Jeff Merkely in the wake of the Umpqua shootings. In the unlikely event that Congress passes something like this soon, a large, thriving gun industry and gun culture would still exist. And it’s by no means certain that people such as the Umpqua shooter would fail a background check.

So when deadly weapons are so easily accessible in one of the most liberal states in the country, what hope is there for bringing gun violence under control?

Okamoto is pragmatic on this point. She says that Oregon’s background checks have prevented sales to dangerous people, and have therefore undoubtedly saved lives. For her, “gun violence is like cancer. Not all cancers are the same, and you need different medications for different kinds.” This means making hard choices about what can realistically be addressed in any given political moment.

Despite the stark differences between Americans over what guns mean, she thinks that we will get there: “People don’t realise how much gun owners have in common with non-gun owners. Two-thirds of Americans believe we should ban assault rifles.” She talks about responsible gun ownership in a way that chimes with the self-perception of many people who attend shows like the one in Portland.

Despite the industry’s size and despite gun culture’s resilience, Oregon’s own measures, such as background checks, show that change is possible – and that more is needed. “We don’t have to lose 30,000 people every year to gun violence,” Okamoto says.

She believes that more people, including those who attend gun shows, are coming around to the same view.

‘We had a shooting, so it went nuts’: business is booming at Oregon gun show | US news | The Guardian.