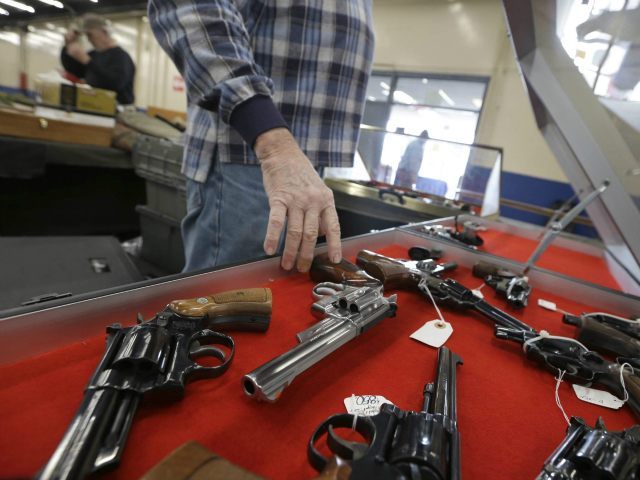 On September 29, Breitbart News reported on a Quinnipiac University poll showing that the majority of American voters oppose more gun control—and this opposition includes roughly 3 out of 4 Republican voters and 49 percent of Independent voters.

Yet amid all this opposition to more gun laws, the poll clearly indicated that Americans have yet to grasp that background checks are gun control’s Trojan Horse.

But any congruent line of thought ended when Quinnipiac asked about “requiring background checks for all gun buyers.” At that point, 90 percent of the Republicans who were overwhelmingly opposed to gun control said they supported such checks, 92 of Independents also supported the checks, as did 93 percent of whites. This is proof positive that many American voters who staunchly oppose gun control have not yet come to understand that expanded background checks are gun control’s Trojan Horse.

When gun control advocates like Sen. Joe Manchin (D-WV), Governor Terry McAuliffe (D), or Gabby Giffords and Mark Kelly call for expanding background checks, they are saying that private gun sales out to be outlawed and that every gun sale—retail or private—should be required to take place under the oversight of the government. Giffords and Kelly are fond of telling Americans that this will make us safer, while Manchin and McAuliffe tell us it is just “common sense.” Ironically, none of these gun control advocates tell us the most important thing—namely, that background checks do not prevent public attackers from acquiring guns with which to kills innocents.

But the greatest example of hypocrisy to date regarding background checks came from Senator Manchin, who traded his pro-gun campaign promises for the approval of President Obama and Michael Bloomberg in the wake of the attack on Sandy Hook Elementary. Manchin pushed expanded background checks as a remedy to the heinous attack. He touted them at press conferences, on Sunday morning news shows, and during weekly appearances on various cable networks. Then, just three days before the Senate vote on expanding background checks was to be held, Manchin admitted that his background check bill would not have stopped the Sandy Hook tragedy from happening.

And this gets to the root of what the American voter needs to understand. Background checks to not deliver on promises made when they were implemented for retail sales, so there is no rational reason to believe expanding the number of checks that take place will make any difference. What such expansion will do is further the progress of the gun control advocates by providing them with a cornerstone around which they can build and upon which they can erect more and more gun controls by assuring us that a little tweaking here and a little tinkering there is necessary to make expanded background checks work just right.

One of these tweaks will be a national gun registry. Breitbart News previously reported that such a registry is necessary to the enforcement of expanded background checks. Without it, how can the government know who is selling a gun and when or to whom? Other possible tweaks could be limits on the number of guns Americans are allowed to buy within a given time frame. One gun per month limits have been popular with progressive governors and legislatures throughout history. And gun storage laws with unannounced police visits to verify how every gun registered is being stored would be a very logical tweak once gun control enters American life via the Trojan Horse that is background checks.