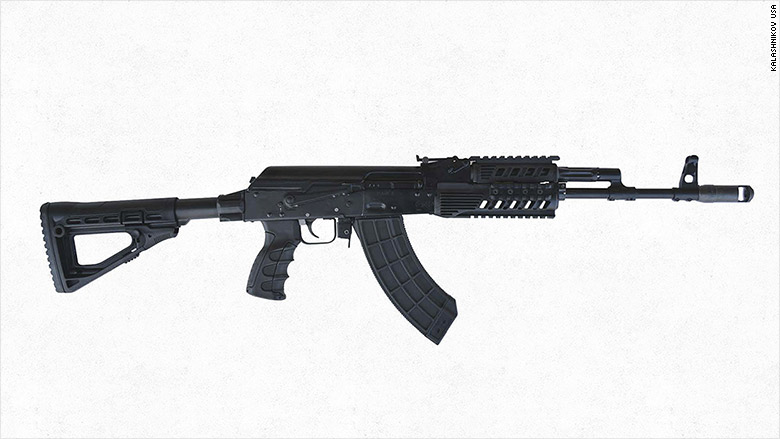 Kalashnikov USA announced on Tuesday that it is now selling AK-47 assault rifles and shotguns that have been manufactured at a U.S. factory.

The Kalashnikov USA web site provides a menu of two rifles and two shotguns, all semiautomatics. One of the rifles features a curved, banana-style high-capacity magazine with 30 rounds.

Thomas McCrossin, CEO of Kalashnikov USA, told CNNMoney in January, at the SHOT Show in Las Vegas, that his company was going to manufacture the guns in America as soon as a factory was established. The company has not told CNNMoney where that factory is located.

The Kalashnikov USA brand is owned by RWC in Pennsylvania. The company’s slogan is, “Russian heritage, American innovation.”

The company was established by the original, Moscow-based Kalashnikov Concern to export its guns into the U.S. But that plan was stymied by President Obama’s anti-Russian sanctions, to punish Russian businesses for President Putin’s war in Ukraine.

The firearms made Kalashnikovs a hot commodity in the U.S., since there was a finite supply. McCrossin told CNNMoney that his company would fix that problem by making the guns in the U.S.

The AK-47 was invented by Mikhail Kalashnikov in the former Soviet Union in 1947. Its durability and reliability in combat has made it the most popular assault rifle in the world, rivaling even the AR-15.

AK-style rifles are manufactured all over the world, including in the U.S. But this is the first time official Kalashnikov-brand guns have been produced in the U.S. They will be available at a number of retail outlets.