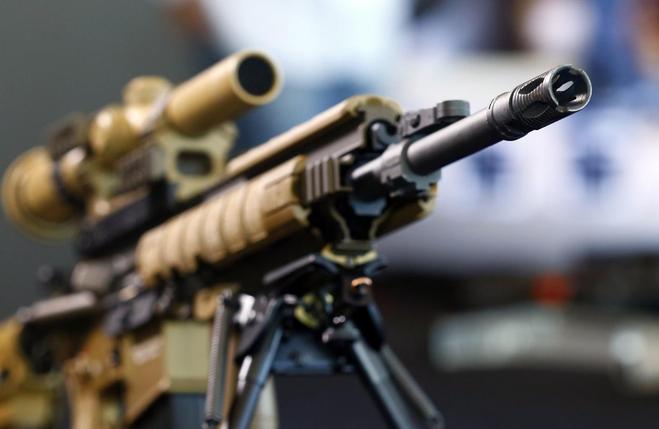 In the lush forests of southern Germany sits a fenced-in compound of drab white buildings that house a company under siege.

Heckler and Koch is one of the most successful gun makers in the world. Its HK416 assault rifle is said to have been used to kill Osama bin Laden and the G36 is standard issue for militaries across the globe.

In years past, the company profited from Germany’s aggressive export policies. In 2008, Chancellor Angela Merkel’s government approved a controversial but lucrative licensing deal for HK that allows Saudi Arabia to produce the G36 itself.

But lately, the mood in Berlin has shifted. And HK’s most important client has become its fiercest critic.

Even worse, for a company that prides itself on engineering it likens to “fine watchmaking”, the government is now questioning the quality of its signature product.

The G36, Berlin says, does not shoot straight in hot weather or when it heats up through constant firing.

“This weapon, the way it is now constructed, has no future in the German armed forces,” Defence Minister Ursula von der Leyen declared last month.

HK, a private company with 700 employees, has always avoided the spotlight. Now it is front-page news and in a fight for survival, its reputation damaged and its business practices and finances under scrutiny.

Last week it invited a small group of reporters to its headquarters in Oberndorf south of Stuttgart.

The message was clear: there is nothing wrong with the G36, a gun HK began delivering to the Bundeswehr nearly two decades ago and has sold to over 30 other countries.

“We are convinced that there is some sort of campaign against us,” said Andreas Heeschen, a 54-year-old German investor who bought the firm from British Aerospace – now BAE Systems – in 2002 and recently relocated from London to Oberndorf to take a more active management role.

HK is vowing to fight back. Executives said it is considering legal action against the government for what it sees as politically motivated slander.

The conflict is more than a battle between a defense firm and a disgruntled client. It also reflects Germany’s struggle to define its role in a world of heightened security risks.

Seventy years after the end of World War Two, Germany is still reluctant to send its troops to crisis zones. Yet until recently it encouraged companies like Heckler and Koch to ship arms around the world.

Berlin is now tacitly acknowledging the hypocrisy of this stance. But reversing course is proving messy – for the government and the gunmaker.

via Germany turns on its top gunmaker | Reuters.