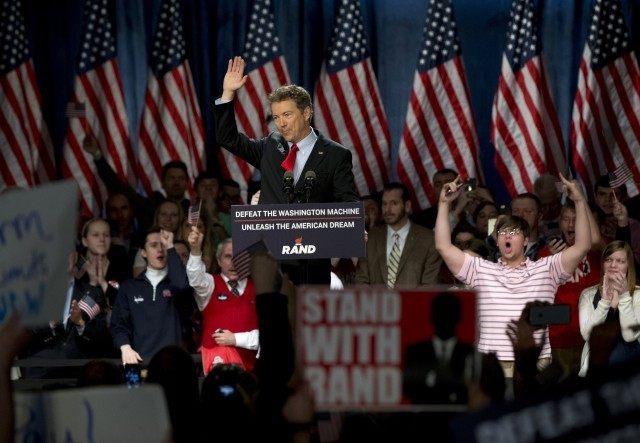 “We initiated a lawsuit on this over a year ago, and we are excited that the appeals court agrees with us,” Paul said.

Now, they’re saying it’s illegal in that Section 215 of the PATRIOT Act doesn’t authorize that—that the government has gone too far—I think that’s a good first step. We want the Supreme Court to eventually rule on whether this is Constitutional or not. Our main complaint, or one of our main arguments is, the Fourth Amendment says you have to name the person who you want to get a warrant—but not naming anyone and putting “Mr. Verizon” down and saying you can get the records of millions of people, you’re not writing a specific warrant.

You’re writing a generalized warrant. This is one of the things that we fought against that the British were doing to us. James Otis famously argued in court that the writs of assistance that the British were using were non-specific and didn’t use the person’s name—and so we wrote the Fourth Amendment to try to stop this kind of stuff. I guess it’s gratifying that the courts are beginning to recognize the problem. We are anticipating and eager for this to get to the Supreme Court.

On Thursday, the Second District’s U.S. Court of Appeals wrote a 97-page ruling in which it found the NSA’s data collection program illegal. This particular case was different than Paul’s class action lawsuit against it, which was filed in Washington, D.C., last year.

“A federal appeals court in New York on Thursday ruled that the once-secret National Security Agency program that is systematically collecting Americans’ phone records in bulk is illegal. The decision comes as a fight in Congress is intensifying over whether to end and replace the program, or to extend it,” the New York Times’ Charlie Savage wrote. “In a 97-page ruling, a three-judge panel for the United States Court of Appeals for the Second Circuit held that a provision of the USA Patriot Act permitting the Federal Bureau of Investigation to collect business records deemed relevant to a counterterrorism investigation cannot be legitimately interpreted to permit the systematic bulk collection of domestic calling records.”

Paul, probably the most outspoken politician against the NSA’s program, said that he’s “all for” data collection against suspected criminals and terrorists as long as the NSA follows the constitutional process of obtaining a warrant for each time they do it.

“Yeah, I’m all for it—like recently the shooting in Texas, if you’ve got probable cause and you call the judge and you put that gentleman’s name on it, by all means go get it [his records],” Paul told Breitbart News.

And if he’s called 100 people and you’re suspicious and you go back to the judge and say, ‘you know what, there is some suspicion that some of these people he called may also be terrorists,’ just keep getting warrants. The thing is, the warrants are not that difficult to get in our society. Every house that’s entered into in this country for murder suspects or rape suspects or burglars, the police stand on the corner and call a judge on their cell phones and get a warrant.

But having that additional step that separates the police from the warrant helps to keep bias out of the situation and keep systemic problems from occurring regarding the gathering of records. The problem I have is we’re gathering the records of every law-abiding American instead of targeting our searches for people who are threatening us.

via Exclusive — Rand Paul: We’re Going To Take NSA All The Way To Supreme Court. And Win – Breitbart.