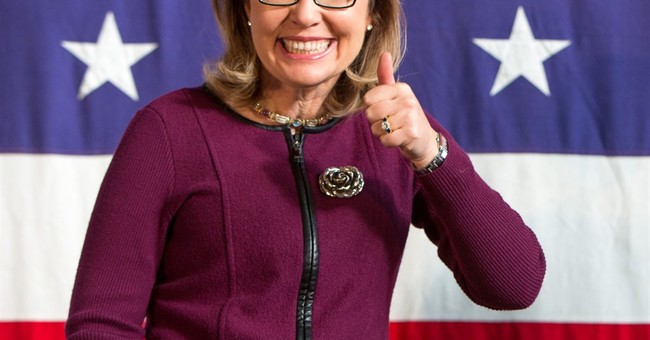 Here comes the magical mystery tour! Anti-gun activist–and former Congresswoman–Gabby Giffords is taking her gun control cause on the road because that is the number one priority on the minds on most American right now…said by no one ever.

Nonetheless, Giffords is embarking on a 9-state tour (via AP):

Former U.S. Rep. Gabby Giffords on Tuesday urged women in Maine to help prevent stalkers and abusers from getting guns, part of a nine-state tour to advocate for tougher laws she says can protect domestic violence victims.The former Arizona congresswoman, who was severely wounded in a 2011 shooting in Tucson that killed six people, told law enforcement officials, domestic violence advocates and others that those who seek “common sense” gun reforms can lead the way in safeguarding women and families from abusers.

“We can change our laws. We can win elections. Please join your voice with mine,” she told the roughly 20 people gathered at the University of Southern Maine campus to discuss gun control policy ideas and challenges.

During the more than weeklong tour that will take Giffords from Maine to Washington, she will urge residents to press their state and federal officials to prohibit people convicted of stalking and domestic violence misdemeanors from possessing guns.

Her gun-control advocacy group, Americans for Responsible Solutions, calls guns and domestic violence “a lethal mix,” noting that abuse victims are more than five times more likely to be killed if the aggressor has access to a gun.

The tour will take Giffords to New Hampshire, Connecticut, Pennsylvania, Arizona, Minnesota, Iowa and Oregon. The last stop of the tour will be in Seattle, Washington, on Oct. 22.

So, since there is a law that is already on the books barring people convicted of domestic abuse from owning firearms, the issue will eventually have to revert back to background checks, which is another area where liberals have made their case and failed to convince the public that cannibalizing their civil rights would lead to safer communities.

After all, sacrificing freedom for safety is beyond repugnant.