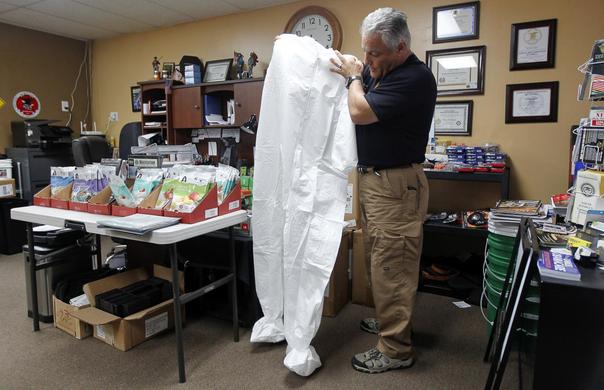 With the closest known U.S. cases of Ebola diagnosed about 160 miles away in Dallas, Cary Griffin is taking no chances.

If, as the former correctional officer fears, the virus spreads to hundreds of people, Griffin is headed to the woods.

“I’ll do what the English royalty did to survive the bubonic plague,” Griffin said, referring to King Charles II’s flight to the countryside during the Great Plague of London in 1665-66. “I’m going into the country.”

Griffin, 27, of Huntsville, Texas, is among a growing if loosely-defined segment of Americans, known as “preppers,” who plan, train and stockpile in preparation for a natural calamity or societal breakdown.

For many, the three cases of Ebola diagnosed in the United States so far since late September represent a new potential disaster and a reason to run to the store.

Preppers are at the extreme edge of concern over Ebola, which has led to a series of false alarms driven by fear. Government efforts to stop the virus spreading from the three worst-hit West African countries, where more than 4,500 have died, include some travel restrictions and enhanced screening at airports.

Chad Huddleston, an anthropologist at the University of Southern Illinois at Edwardsville, who studies preppers and estimates their numbers in the United States in the low hundreds of thousands, said those he has talked to are more concerned with undue public fear than with contracting Ebola.

The virus was diagnosed in a Liberian visitor who was infected in his home country and two nurses who treated him at a Dallas, Texas hospital when he was dying and at his most contagious. Both nurses have been moved out of the state for treatment in hospitals equipped to treat Ebola patients.

The movement’s profile rose thanks in part to the National Geographic Channel TV show “Doomsday Preppers,” and includes strains as disparate as off-grid homesteaders in the Great Plains, wilderness experts in the Mountain West and suburbanites across the country with caches of food and guns.